Trust Top of Mind at the KNOW Identity Conference

The issue of trust has broken through as one of the top concerns for leaders across every major industry. Nowhere was this more clear than at One World Identity’s KNOW Identity Conference in Washington last month.

Rattled by the latest round of high-profile breaches of customer data, managers and executives from the financial, travel, telecommunications, and other industries attended in greater numbers than before at this conference. Clearly this is because we’ve reached a tipping point.

Simply put, trust is the new currency of the digital age. What’s more, the industry leaders I heard from and spoke with at the conference increasingly understand that the foundation of trust is identity verification. And, despite all the other advances we’ve see in the modern era, identity document verification is still the best path to digital identity verification.

Trust: The Foundation of the Digital Economy

Recent high-profile data breaches were on the minds of those of us attending the conference, and a major topic of conversation as leaders asked: how can we avoid being next? These data breaches not only expose customers to identity theft, but actually undermine the entire foundation of the digital economy. It’s not a stretch to say that without trust there can be no digital economy.

Keynote speaker Nick Shapiro, Airbnb’s Global Head of Trust and Safety, understands this better than most—his entire business is based on users trusting each other enough to share homes without ever having met. For Airbnb’s business model to work, trust in the real world has to start with trust in the digital realm as users find each other and connect online.

As Nick pointed out, users, as well as the company itself, have to know that people are who they say they are before transactions can move forward. Not only the security of the company’s transactions, but also the physical safety of the company’s users depend on it. That makes identity verification the key to Airbnb’s success. But it’s also vital to the success of any company that does business online—which, these days, means just about everyone. 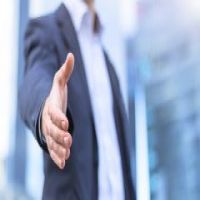 Identity: The foundation of Trust

Just as Airbnb users need to know that the people they’re inviting in their homes are who they say they are, companies need to be able to trust that people logging into their networks are legitimate users in order for secure transactions to take place. But how do we enable the most secure identity verification possible?

A common means of identity verification in the digital world has been through knowledge-based answer methods. Users answer a set of personal questions that presumably only they would know the answers to. This method depends on comparing the user’s answers to a database of correct answers, and that’s a problem.

The answer to this problem, as it has been in the physical world for centuries, is physical documents issued by trusted authorities. That means government IDs.

The Role of Government

Because they are issued by recognized authorities, government-issued identity documents such as driver licenses and passports are still the strongest source of identity verification, online or off.

It’s now a mainstream view, accepted by a great many of those attending the conference, that government document ID verification may represent the gold standard for establishing trust. This was not the case even as recently at last year’s conference.

The question is, how do we transfer the best possible form of identity verification, government IDs, from the physical into the digital world? Scanning physical documents quickly and easily is not a trivial challenge. Fortunately, technologies such as our Mobile Verify can get the job done by running advanced, fully automated authenticity checks to verify documents seamlessly and without effort on the user’s part.

More is needed, of course, and that’s where another topic on people’s minds at the conference comes in: regulation.

Sweeping new data security regulations are coming—PSD2, GDPR, AMLD5, and more—leading to a scramble for compliance before they go into effect. However, along with the challenge of increased regulation comes a big opportunity.

While some may view new regulations negatively, talk by CTOs and other corporate leaders at the conference was of how regulations might actually benefit them and their customers.

That’s because while regulation may increase compliance burdens, it will also help protect companies against losing that most important asset off all: the trust of their customers. Viewed in this light, increased regulation can actually be seen as an endorsement of the digital economy, with the potential to strengthen it overall.

The Future of Identity

Ideas are surfacing about how to create a consumer-owned-and-managed digital identity. However, these ideas are still several years away from the kind of maturity sufficient enough to have broad impact.

That means that physical documents such as driver’s licenses will continue to help us bring major areas of our lives—housing, travel, insurance, banking, you name it—into the digital economy for the foreseeable future. Their value for proving identity is even greater given the inevitable data breaches and all the other challenges to come.

In other words, today and for several years, nothing can beat government-issued documents for establishing trust for digital transactions. Those documents along with the right technologies for bridging the gap between the physical and digital worlds for identity verification are what’s needed right now to keep the digital economy humming into the next decade.

What will next year’s KNOW Identity conference bring? Whatever it is, the issue of trust, I am confident, will remain top of mind for corporate leaders for the foreseeable future.

Chief Operating Officer. Kalle brings over 20 years of experience in management, operations, and corporate strategy to the work of maintaining Mitek’s leadership position as the global leader in digital identity verification.