Digital identity for the world

Identity as a human right 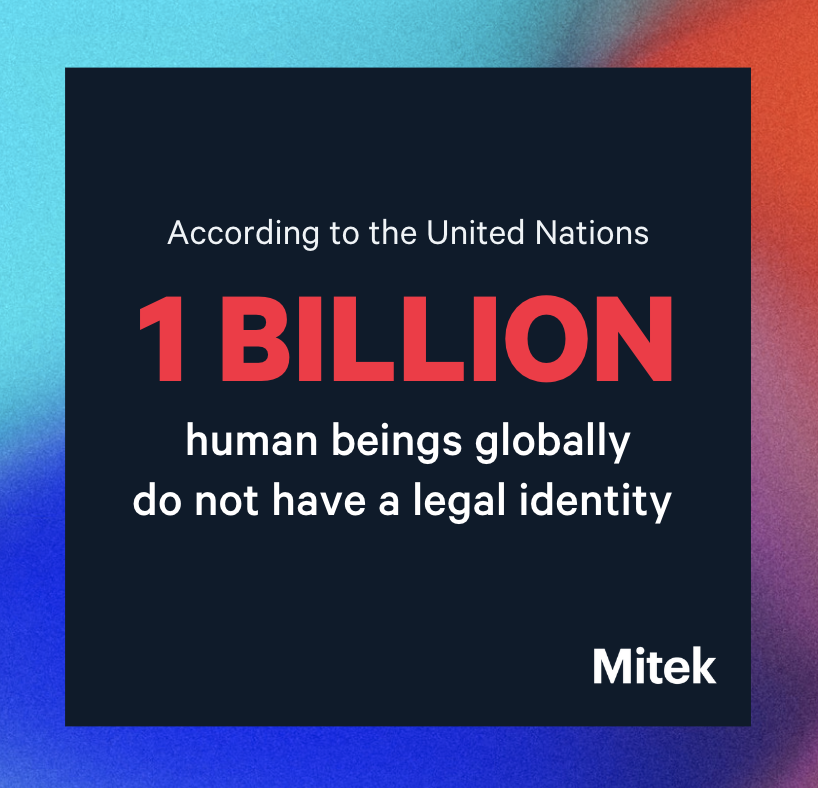 Everyone has a name, although for people in many parts of the world they become more commonly known in their community by an alias rather than their official government name.

Everyone has a date of birth, although not everyone in the world has an official government record of this. Perhaps, for many, it was not a common practice to have their birth registered.

Not everyone has a formal address that the government recognises, although many find themselves fortunate enough to have a place they call home.

So that means that every person should have a confirmed identity. Why? Because a confirmed identity exists in relation to the economic and social structures in which we live. A person’s identity grants the individual access to resources, whether transactional products and services or public healthcare and welfare.  Having a confirmed identity is especially important for basic rights of passage such as enrolling in education, joining the workforce, marriage and having children.

Article 8 of the United Nations Convention on the Rights of the Child (UNCRC) provides for every child to be born with the right to an identity and for their identity to be protected from interference. Identity is therefore chartered as a human right for each person in the world.

Unfortunately, Article 8 is a right which is not afforded to 1 billion people on this planet, which is approximately 15% of the world’s population. Of this number, 81% live in Sub-Saharan Africa and South Asia and 85% are from either low or lower-middle income economies. Research also suggests that of low income economies, women are particularly affected by lack of a confirmed identity.

However, it is not just in the developing world where the challenge of citizen identity exists. In the UK, 1.2 million adults were ‘unbanked’ in 2020 (approx. 2.2% of the adult population) as a result of not having appropriate identity credentials or attributes to allow them to access mainstream financial services, although this is an improvement from 1.71 million in 2014. Across demographics in the UK, those who were less likely to hold a valid form of ID are the unemployed, those without formal qualifications, those who have never voted and those above the age of 70.

According to a recent Economist/YouGov poll, only 37% of American adults say they have a valid and unexpired U.S. passport – about the same percentage as those who have never had a passport at all (38%). Another one in five Americans (20%) have an expired or invalid passport. Furthermore, an estimated 5.4 percent of U.S. households (approximately 7.1 million) were “unbanked” in 2019, meaning that no one in the household had a checking or savings account at a bank or credit union (i.e., bank).  This 7.1 million figure is actually a large decline (ie. improvement) from 8.6 million since 2017.

The World Economic Forum reports that a 1% increase in inclusion would result in a 3.6% increase in GDP. However, national ID schemes are not always popular in democratic societies who are fearful of how their data will be used. In the UK, for instance, Parliament has repeatedly pushed back against proposed legislation for a national identity scheme, largely based on anticipated voter sentiment and it is unlikely that legislation for this could ever be passed.

However, there are an increasing number of people over the world fleeing war, persecution and conflict who have no way to prove their confirmed identity. It is therefore no surprise that one of the United Nations’ Sustainable Development Goals (Target 16.9) actively seeks to provide an identity for all by 2030, the key indicator being the proportion of children under the age of 5 years whose births have been registered with a civil authority.

Something we can do?

There are many reasons why an individual may be excluded from resources and services. Common reasons include being asked to provide specific documentary evidence that they do not have as proof of their identity or reliance on specific datasets which do not have a record of the individual to validate their personal information.

Any identity management system that excludes people has huge consequences on citizens and their needs. This is because exclusion disproportionately impacts the most vulnerable in society. Those excluded can include survivors of conflict or those who have fled domestic violence and no longer have physical access to any identity documents. It can also include those who are unable or cannot afford to obtain government-issued identity documents in the first place.

The identity sector can help solve this!

There is more that we can do on the issue of inclusion , but sadly not every sector has the same degree of interest in addressing this problem.. Private sector firms are incentivised to deliver shareholder value and therefore mostly solve problems where there is a commercial benefit in reducing costs, becoming more efficient or speeding up processes.

Fortunately, the identity space is a bit different with a bunch of identity management firms who state corporate principles focussed around building tools that also serve purposes for the good of society at large, as well as their paying clients.

There are also notable organisations such as Women in Identity who advocate vociferously for identity inclusion to be championed, through a Code of Conduct.
Some identity firms are trying to improve the inclusivity of their services by accepting a wider variety of evidence. This includes using various proofing combinations to yield a requisite level of confidence in the confirmed identity.

Vouching has become a much-discussed proposed solution, where someone’s declaration of knowing the person (known as the ‘vouch’) is confirmed as acceptable evidence.

In the UK, digital identity service providers must follow the Equality Act 2010 when considering how to reduce exclusion as a result of their ‘protected characteristics’. It is therefore paramount that where software is used to authenticate an identity its performance has been tested properly across different demographics so that it doesn’t unintentionally exclude sets of people.

For example, Mitek’s training data for biometric face and liveness detection requires developing new sources of permissioned data across the globe. This requires cultural sensitivity to make sure that our passive biometrics system doesn’t impute bias. For example, women wearing hijabs can be flagged incorrectly and falsely rejected. To work properly in authenticating women wearing hijabs, datasets of this demographic need to be included in the system so that it can be trained properly

Furthermore, ensuring that individuals never have to pay to create or share their identity is another big boost for those who need to prove who they are the most.

Inclusion can shape our future

Inclusion, or at least for the moment how to reduce exclusion, is one of the most-discussed topics in identity at this time.

s previously mentioned, there are proposed solutions and projects currently underway. However, if progress can’t be made quickly enough then the most vulnerable will continue to be in great peril. The changing geopolitical landscape is driving more migration than we have ever witnessed before, forcing us to become more acutely aware of the challenges for border control and equally for refugees and asylum seekers.

These challenges are shaping the way democracies are beginning to think and feel, which in turn is driving a new wave of political reform towards protectionism and away from globalisation.

The Tony Blair Institute recently published its thoughts on digital identity as a means to facilitate the reform of the UK’s asylum system, including the introduction of a system of digital identity verification and the opening up of safe and viable routes for asylum claims.

The EU and the UK, continue to see a rise in those trying to reach its borders, magnifying issues in the asylum application process whilst criminal organisations continue to profit from illicit human trafficking as there is no due process which allows individuals to apply for asylum from outside of the country in which they are arriving from.

The toll on human misery that this inflicts is one of today’s greatest tragedies. There is a necessary role for the identity tech sector to play in working with governments to deliver an improved global system. Imagine the benefits of being able to reduce exclusion and broaden infrastructure to accept wider forms of evidence which are free of bias and commonly accepted as secure and meaningful? Services become readily accessible, eligibility criteria can be more quickly and clearly established, border control processes work in an orderly and efficient manner, and seeking work and accommodation can be made easier through a developed digital identity system.

We, in the identity space, are unable to prevent conflict but we can play our part in developing better identity systems which can prevent criminals from seizing opportunities to trade in human misery. And it all starts through ensuring that every child born has their basic human right fulfilled before they even become aware of it, by granting them an identity that is theirs to keep.

Read the first two blogs from this series by Gareth Narinesingh:

Digital identity wallets: the chicken or the egg?

A global perspective on the progression of digital identity

Gareth Narinesingh is Head of Digital Identity at HooYu, a Mitek company.