5 secrets fraudsters don’t want you to know in 2023 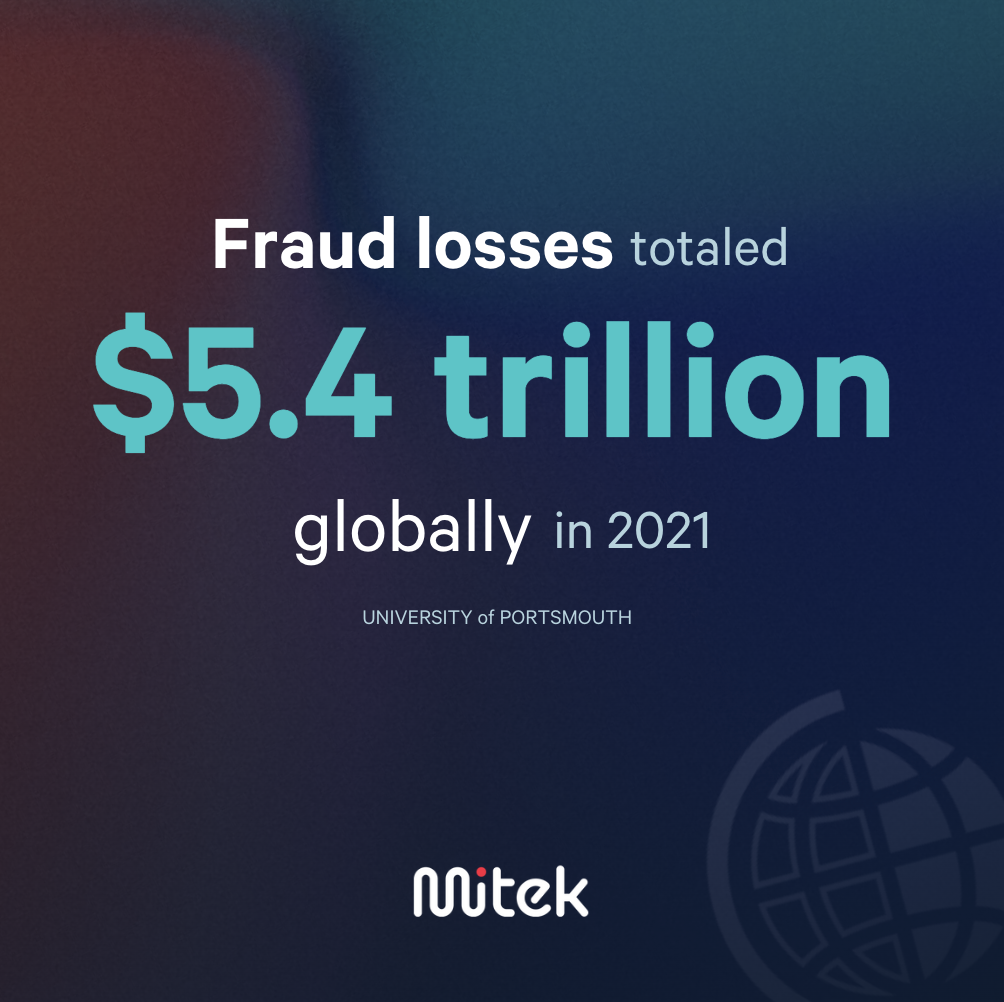 Fraudsters are shape shifters and transform their attacks based on opportunities, including using deepfakes and synthetic media. They operate using sophisticated fraud techniques that target everyone from Gen Z to Baby Boomers and often times take the digital path of least resistance. After Javelin’s 2021 Identity Fraud Study: Shifting Angles, reported that combined identity fraud losses reached $56 billion in 2020, now, according to the University of Portsmouth, it’s estimated that fraud losses totaled nearly $5.4 trillion globally in 2021.  Yes, that’s trillion - - with a ‘T’! And the threat of identity fraud and identity fraud scams continue to escalate.

Even with these staggering numbers coming to light, according to the Digital Trust report by 11:FS + Mitek, 72% of consumers are still willing to share their personal info if it delivers easier future access to an account or service. Consumers and companies can help protect themselves by being aware of how fraudsters go on the attack and by embracing new technologies that detect suspicious activity and reduce the chance of being perpetrated by fraud.

The list below will help uncover the top 5 secrets that fraudsters don’t want you to know.

It’s not a secret that fraudsters use various techniques to execute their scams, however their ever-evolving tailored cybercrime attacks have become extremely sophisticated.  Javelin Strategy and Research states “Applying communication tactics that appeal to the target audience of potential victims simply means that criminals will reach the intended scam victim faster through a communication channel that is familiar and trusted.” Criminals now target consumers based on their age, gender, and socioeconomical status.  They prey on victims through lucrative social media messages or rushed, threatening phone calls.  Relying on consumers emotions, these scammers want their targets to make hasty or greedy decisions, believing in a get-rich-fast offers or threats of expiring car warranties.

Fortunately, even older consumers are catching on to the best ways to protect themselves from scams, with 69% of baby boomers and seniors now willing to use two-factor authentication, according to a PYMNTS report.

According to Sift, account takeovers and attempts rose 282% between 2019 and 2020.  They call account takeovers the ‘fraudster’s weapon of choice’. Criminals show a growing appetite for a total account takeover, which involves the takeover of multiple accounts belonging to a single consumer. This often starts with an email account take over, which gives the bad actors access to other accounts, which they can then change the passwords to.  Criminals thrive with unconstrained access to manipulate and hide their fraudulent activity from the victim across mobile devices, email accounts, and any communication related to account changes and password reminders.

Password hygiene has improved, with 61% of people now using stronger passwords [after suffering an account takeover or hacking] and 50% changing their passwords more frequently, however switching to a more advanced authentication option, like biometrics, is much more secure.

Learn more on how to modernize your fraud fighting tactics

Download the new eBook, Beyond passwords: a guide to biometric authentication

Enrique Alvarez, who works in the FBI’s cyber unit in San Francisco told PYMNTS.com., “I'm shocked that, 50 years later, we’re still dealing with passwords as a component for authentication,” he said. “There are literally billions of username/password combinations sitting on the dark web.”

Using biometrics and intermittent step-up authentication is a very effective way to increase the efficacy of existing fraud-detection capabilities. Criminals are continuously scheming on fraudulent account-openings and attempting to access backdoors to increase their profits. Adding verification layers and continuous authentication throughout the lifecycle of the customer, will help to create a level of friction acceptable to customers, but also reduce criminal success rates.

According to research done by Vanson Bourne, 89% of decision makers in the financial services industry agree that organizations need to adopt passwordless authentication to ensure the highest level of authentication security.

4. Biometrics are the answer to passwordless authentication

According to a Verizon Data Breach Investigations Report 81% of data breaches involve weak, stolen, default, or otherwise compromised credentials. Enter our hero - - biometrics.  Biometrics assures the person initiating the interaction is who they say they are.  “The precise structure of our face, the patterns in our irises, the specific squiggly lines of our handprints, the inflection of our voices and even the specific way we type on a phone are 100% unique to every human being on Earth,” explains Mitek CTO, Stephen Ritter.  Biometrics are extremely hard to spoof and they can be physical, such as fingerprints, voice pattern or retina - - or behavioral, such as how we type or the way we swipe on a phone.  The adoption of biometric technology has gained major momentum through the rise and change in the digital landscape and offers dynamic, secure armor to fight slippery fraudsters. The real winner is the consumer here, as biometrics offer the perfect balance of security and convenience and cut out the need for passwords and other risky verification methods.

With the broader biometrics market projected to drive nearly $100 billion in revenue by 2027, it’s no wonder that according to an Experian survey, 74% of consumers perceived physical biometrics to be the most secure method for digital identity verification

One thing fraudsters have a very hard time skirting around is liveness detection. Sanjay Gupta, Mitek’s VP of Product says “Liveness detection provides the opportunity to analyze information in real time and detect the physical presence of a human.”  Technology that can verify someone through facial and voice liveness detection ensures the presence of a live user in front of the capture device (camera, microphone, fingerprint reader).  Fraudsters are very keen on spoofing the system with video, audio and fake sophisticated government documents, so deploying liveness detection such as passive facial liveness is paramount to a successful onboarding solution.

With voice and facial recognition poised to lead the way for biometric technologies in the future, having access to liveness detection as an additional and effective layer of security is a game changer for businesses and their customers.

The battle against fraudsters is never ending and as we adjust, they do as well.  Knowing how to detect fraud and securing ourselves against the constant attacks is the first step in the fight.  The more we know about fraud tactics (including learning "what is check fraud?"), the more anti-fraud professionals can use sophisticated IDV solutions to combat fraud, finical crime, and identity theft.