Based on its findings, Aite suggests that mobile capture and identity verification are key to meeting customer acquisition goals by simplifying the mobile on- boarding process and making it more secure. Here are Aite’s top recommendations for executives responsible for new account acquisitions:

1. Prepare for an increase in application fraud.

As the migration to EMV progresses in the United States, application fraud rates are expected to significantly increase. Canada saw its application fraud losses increase nearly 500%, and is a prime example of how fraudsters shift tactics from counterfeit card fraud to other forms of fraud.

Major data breaches have also provided criminals with an ample inventory of personal identity information. As a result of these converging forces, more than half of the large financial executives surveyed believe that application fraud in the United States will follow the example of Canada.

2. Build your fraud-mitigation strategy based on the assumption that data has been compromised.

Financial institutions must use new means of verifying the data presented during the application process. In fact, the majority of those surveyed by Aite reported that application fraud has increased in the online, mobile and call center channels over the past two years.

Branch fraud rate has stayed flat for the majority of the respondents, reflective of the fact that fraud is much easier to perpetrate in a faceless environment that relies on readily compromised information.

3. Create a delightful customer experience for your new applicants.

With 68% of the U.S. consumer population owning a smartphone, mobile is increasingly the device of choice for consumers. In spite of the momentum toward mobile, applications originating from the mobile channel have been lagging thus far. One of the inherent challenges to mobile account acquisitions is smaller real estate, both in terms of screen size and keyboard, but banks are recognizing the impact of onboarding, with 95% of banks rating it as an important factor in determining their investment in new account risk assessment tools. 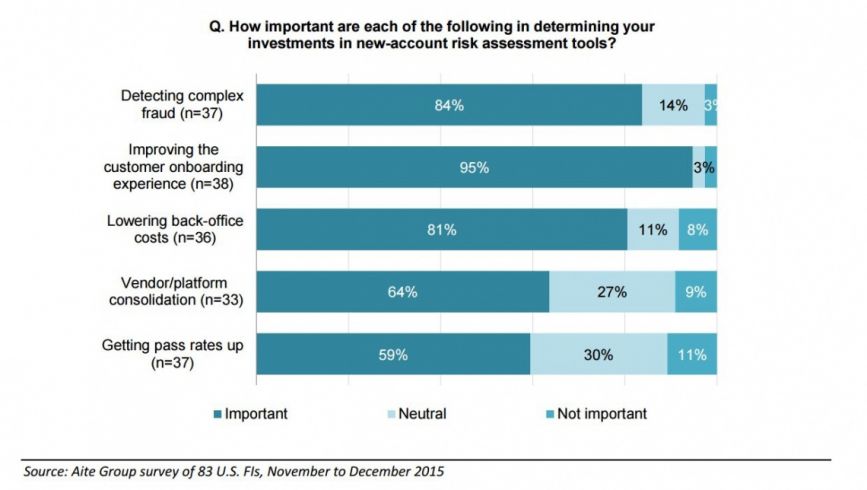 Mobile capture and mobile ID verification solutions can be a very effective solution to this user experience and onboarding problem. These solutions use the camera on a mobile device to capture a picture of an identity credential such as a driver’s license, verify the credential and parse the data into the boarding system, eliminating the need for consumers to go through the arduous data entry process.

4. Add mobile data capture and verification to your near-term roadmap.

Mobile capture and ID verification can help with the challenge of risk assessment while at the same time improving the customer experience. Consumers are saved the need to type lots of data into a tiny little keyboard, and financial institutions can automate much of the back-end verification process.

Aite found that the percentage of financial institutions with mobile data capture and verification solutions already in place or in the implementation process are fairly equally split among large, mid-size and small financial institutions at 13%, 20% and 19% respectively. Even larger percentages have mobile capture on their one-to-two-year roadmap.