Some years ago, the mere idea of being able to authorize a payment by simply touching your mobile phone’s screen sounded like science fiction. Back to the future, using fingerprints, selfies, voice or other biometrics to authenticate transactions in the mobile channel has become a reality. 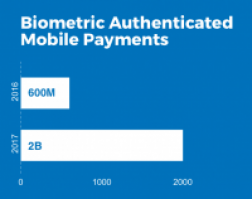 While much of this initial growth has been attributed to the rapid penetration of Apple Pay, other e-wallets including Android Pay and Samsung Pay have been ramping up their biometric authentication solutions. With consumers increasingly using their smartphones to make purchases – mobile commerce in the U.S. is expected to grow 29% or more annually -, and as digital wallets gain acceptance, the number of mobile payments authenticated by biometrics has nothing but explosively grown, rising from the just over 600 million transactions registered in 2016 to the 2 billion expected to happen this year.

The size of the mobile payments opportunity has been further boosted by the greater availability of fingerprint sensors (according to Juniper Research, around 60% of smartphone models are expected to ship with such sensors this year), voice recognition software and advanced cameras that capture high-quality selfies for facial comparison and identity verification.

Meanwhile, companies are starting to address earlier issues that deterred m-commerce from going mainstream, such as small mobile devices’ screens or the lack of fully digital buyer journeys. Thus, while smartphone manufacturers are enlarging their devices to improve the user experience, businesses explore mobile-first experiences such as one-click checkout or selfie payments.

Trailing the waters with its pioneering ‘Selfie Pay’ pilot, Mastercard polled users in 2016 and discovered that 74% of respondents said biometrics like fingerprints or selfies were easier to use than typing in a password. Furthermore, 90% said they think they would use biometrics for online payments in the future because they see it as a more secure method.

Similarly, U.S. adults surveyed in a report issued earlier this year said they want more biometrics options for mobile banking and view biometrics as more secure than passwords. In particular, 79% of the respondents said they want the opportunity to use more biometric authentication methods including facial recognition to access mobile banking or payment apps.  Additionally, 42% wouldn’t use a banking or payment app that doesn’t offer biometric authentication. Meanwhile, across the Atlantic, 56% of UK consumers would prefer to use a biometric security method over traditional options like passwords to log into their financial accounts online, research released by Equifax reveals.

Aware of consumers’ preferences, companies such as Visa or MasterCard are taking the mobile experience a step further and letting shoppers take a selfie with their smartphone’s camera to verify their identity and authorize purchases. Mastercard’s Identity Check Mobile allows users scan their fingerprints or take a selfie to authenticate their identity and make a payment, while Visa has joined forces with Brazil’s Neon Bank on an online login service that enables consumers to use selfies to confirm their identities for online purchases.

The proliferation of mobile devices and the convenience these offer, combined with the greater level of security and risk mitigation introduced by advanced biometrics authentication will help service providers strike the right balance between ease of use and security at a time when mobile commerce is flourishing: analysts predict that by 2019, almost a trillion dollars will be transacted globally using mobile payments.