What will the new year bring for the mobile and financial services industries? Mitek’s has studied the mobile preferences and economic impact of Millennials, spoken with leading global financial institutions, and analyzed the evolution of the regulatory landscape to come up with five predictions for the financial services and mobile industries in 2017.

As we take a closer look into the ongoing regulatory developments affecting financial services around the world, we foresee how Anti-Money Laundering and Know Your Customer initiatives will gain even a more prominent place within the international regulators’ priority list.

It’s worth recalling that over the past five years the U.S. government has heightened the enforcement of AML & KYC regulations, bringing a series of high profile cases against financial institutions. BNP Paribas, HSBC, Citigroup, JPMorgan or Raymond James among others stand as the record-holders for largest AML and KYC related sanctions fines. Relevant authorities fined them following their failure to conduct sufficient due diligence on high-risk customers and to prevent or detect, investigate, and report suspicious money laundering and terror financing activities. This trend is also noticeable in other countries such as the UK, where the financial markets’ regulator – the Financial Conduct Authority – brought Barclays into a $100 million settlement for violating applicable AML laws. Meanwhile, Canada has strengthened its anti-corruption laws, Hong Kong has set up a task force to detect corporate fraud and France created a new Central Office Against Corruption, Financial and Fiscal Offenses.

Although many financial institutions have learnt the lesson and invested heavily in improving their customer identification and know your customer programs, regulators have not been shy about imposing substantial fines on those institutions that fail to comply with AML laws.

Thus, we expect this trend continue and envisage that it will result in more than $5 billion in fines levied on financial institutions in 2017 for failure to adequately meet KYC and AML requirements. 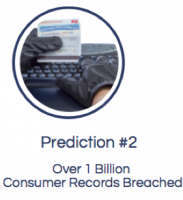 Just in the first half of 2016 we saw 974 reported breaches worldwide, which resulted in over half a billion records compromised. As data breaches rapidly multiply and get more sophisticated, security measures solely based on the so-called ‘knowledge based authentication’ (KBA) are falling out of favor at a similarly fast pace.  A recent research unveiled that 75% of companies [1]surveyed were planning to move away from relying on passwords and ‘what you know’ security questions only. In the same vein, 69% of companies polled said that usernames and passwords alone no longer provide sufficient security.

Given this scenario, and taking into account that Yahoo just announced another 1 billion records breach in December, we predict there will be more than one billion consumer records breached in 2017, eventually causing many companies to abandon the use of passwords for good and embrace identity verification and authentication methods beyond KBA. 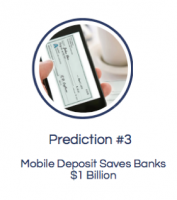 As remote deposit capture becomes a mature market in the U.S., demand of mobile capture to deposit checks remotely nothing but keeps growing, specially among business and commercial users. Celent calculates that half of retail bank deposits in the U.S. in 2016 were made via mobile - Mitek Mobile Deposit® alone surpassed more than 1 billion checks deposited in 2016 -, adding momentum for this trend to grow even further in 2017. Additionally, the roll-out of this technology in the UK in 2017 will be a boon for the amount of checks deposited via mobile capture worldwide.

Based on the sustained adoption of remote check deposit via mobile devices and knowing that financial institutions have saved an estimated $2.5 billion in reduced processing costs since its introduction, Mitek predicts that those financial services providers using mobile capture for remote check deposit will be able to save up to 1$ billion in operational costs in 2017. 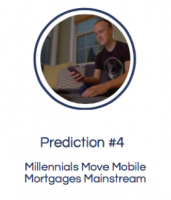 Our third edition of the Millennials Annual Survey unveiled the increased desire of the U.S. largest population to better leverage the camera on their smartphones and use mobile capture to enroll with new services, open bank accounts, or get a mortgage. In fact, this year’s survey found out that 40% of Millennials want to be able to apply for a mortgage by taking pictures of their documents rather than filling out paperwork.

Taking into account that Millennials make up the largest group of homebuyers in the U.S. and that 79% Millennial home renters want to buy a house, mobile mortgages generation is bound to skyrocket. Our forecast is that more of $30 billion worth of mobile mortgages will be originated by Millennials over the next twelve months.

Following the Millennials’ wish to use selfies to authorize mobile purchases – just 4% are doing it today according to Osterman research, The Millennial Influence: How Their Love of Mobile Shapes Commerce; and the success that initiatives such as MasterCard ‘Selfie Pay’ are enjoying, we foresee mobile commerce transactions powered by selfies to boom in 2017, enabling circa $3 billion’s worth of mobile commerce transactions in 2017.