Gaming and eSports is one of the fastest growing industries in the world. While it may have previously been buried into the subset of sports culture, it has come to light as a full fledged industry with over 2.7 billion gamers. The Global Games Market Report revealed that $159.3 billion was spent on gaming in 2020, and the market is expected to surpass $200 billion by 2023.

To keep customers safe while online and continuing to enjoy the love of the game, we’ll take you through how biometric identity verification can help foster a less toxic and more diverse gaming experience. 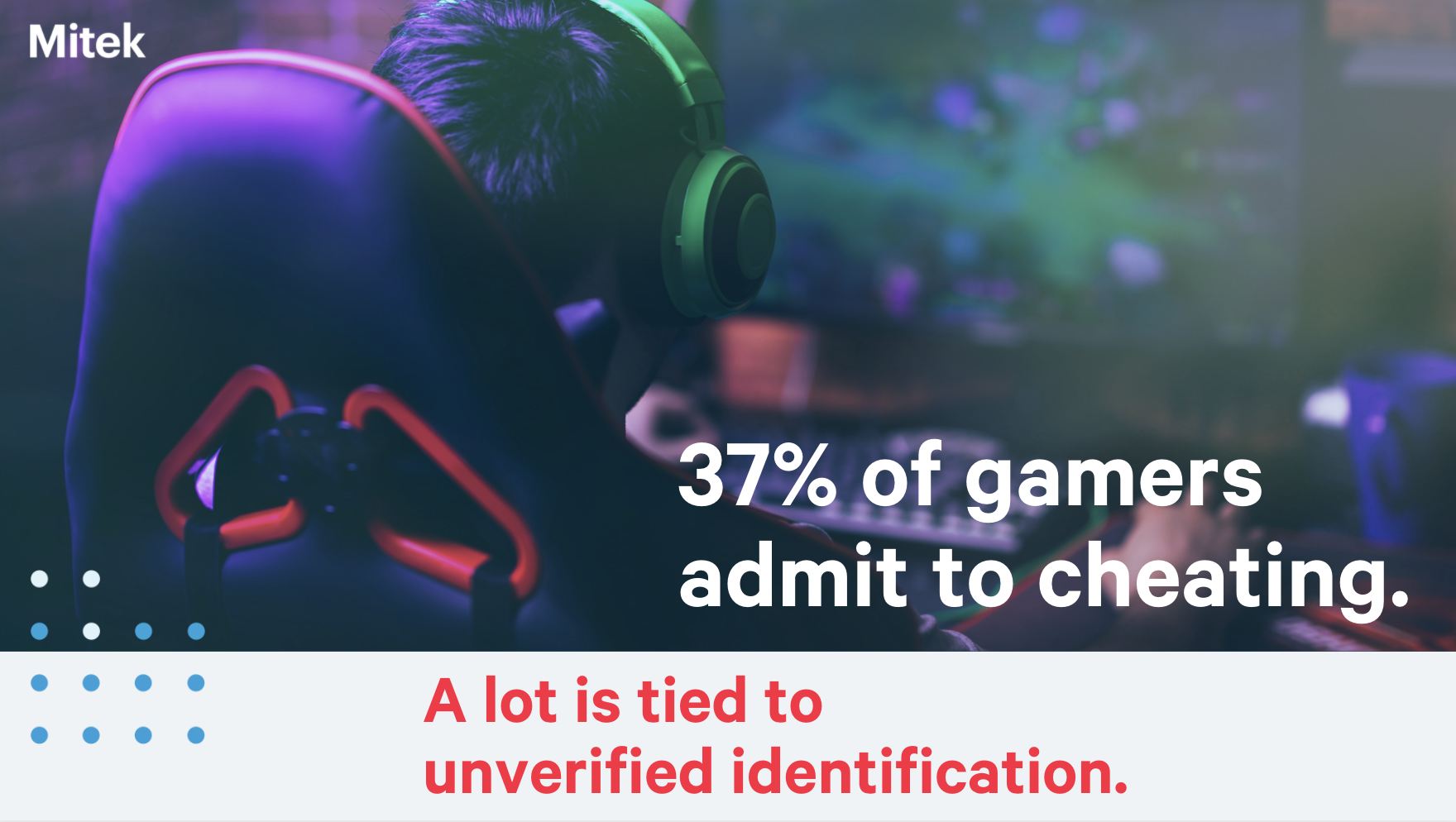 Fraud and cheating in gaming and eSports

As the gaming world grows, the amount of scamming has also increased. Financial fraud is becoming an increasingly significant concern for gamers. With many games involving subscription models and microtransactions, hackers, cheaters, and trolls have more opportunities than ever to take advantage of gamers. In fact, as many as one in five gamers have been a victim of payment fraud in popular games.

There’s also the threat of becoming a victim of cheating. With 37% of gamers having confessed to cheating, a whole new sub-economy within the gaming industry has started to grow. Those wanting to cheat are able to purchase all kinds of digital tools to get around game rules, and even modify code to acquire special features.

According to an article in The Fintech Times with Steve Ritter, CTO of Mitek, the incentive to cheat in eSports and video games is actually quite significant. Motivation for cheating can include anything from winning large tournaments and money, to building notoriety and growing a social media following. While it may seem harmless, cheating fosters a very toxic gaming environment.

Not only does cheating take the fun out of the sport, environments with cheating can result in poor experiences for users. If the game feels unfair or toxic due to excessive cheating, gamers may even quit before the game provider can capture any consistent revenue.

With many games being tied to unverified identification, such as emails, the consequences of cheating are even lower. So what is one of the most effective ways to mitigate this issue? Identity verification.

What is identity verification and how does it apply to gaming?

Identity verification allows companies to onboard their users with more than just their email address. Biometric technology uses artificial intelligence to verify the identity of the individual being onboarded.

Typically this would include facial recognition technology, but can also include fingerprinting and other biometric matching technology. Using this type of verification adds an additional layer of security to the platform and also significantly increases the negative consequences of attempted cheating and scamming.

However, biometric technology also comes with an increased risk of demographic bias and ethical concerns related to biometrics.

So how can racial and gender bias in facial recognition software be minimized?

Biometric and gender bias in gaming

Identity verification in gaming can be invaluable in managing the risk of cheating. However, it’s important that the onboarding process also minimize bias, particularly where the gaming community consists of a diverse group of individuals.

An algorithm is considered to have algorithmic bias regarding facial recognition when it lacks fairness and accuracy in identifying different demographic groups of individuals. As a result, certain groups of individuals are privileged or disadvantaged. As discussed in Steve Ritter’s Biometrics, Fairness, and Inclusion briefing, facial recognition technology with demographic bias often disadvantages demographic groups including women, African Americans, minority populations, and younger individuals.

The gaming industry has been dominated by white males for a long period of time, but there is a clear demographic shift in the growing number of gamers who identify as women and/or people of color, so the consumer demographic data within algorithms need to be reflected. As a result, it’s more important than ever for gaming providers to prioritize recognizing and eliminating racial and gender-based facial recognition algorithm bias in their product offerings, and the industry overall.

Systemic bias in facial recognition has many consequences, including unintentional discrimination. For example, facial recognition AI bias may deny user logins based on their gender or skin color because the machine learning technology is unable to register the identity verification biometric data.

One of the best ways to reduce facial recognition racial bias is to adopt document-centric identity verification software. This type of onboarding requires users to verify their accounts by uploading a personal photo along with images of their government-issued ID.

The future of identity verification in gaming

As the industry continues to grow and the incentive to cheat also increases, game providers have the ethical responsibility to become more stringent with their identity verification procedures.

In addition, while identity verification helps reduce risks of fraud and cheating, the consumer demographic shift in the gaming industry brings biometric ethics to the forefront of the conversation.

By embracing document-centric identity solutions, providers can reduce race and gender bias in their onboarding. Not only will users have a better gaming experience regardless of gender or race, but gaming providers will reap the revenue benefits of a large gaming community full of diversity.

Read more about biometric bias in our world today