REAL ID Act Compliance Deadline Is Now! Are You Ready?

The REAL ID Act was passed in 2005 by the Congress, following recommendations from the 9/11 Commission and aimed at preventing future terror attacks. This regulation requires all states to issue driver’s licenses that meet minimum standards for security and identification since, as the 9/11 Commission noted in their Final Report of the National Commission on Terrorist Attacks upon the United States, at 384 (2004), "For terrorists, travel documents are as important as weapons."

After being passed into law, the bill was tabled until 2007, when it was announced that the federal enforcement of the act would be postponed for a period of two years. It wasn’t until 2013 that the Department of Homeland Security (DHS) announced a phased enforcement plan for the REAL ID Act. Currently, DHS has determined that 22 states and the District of Columbia are fully compliant with the REAL ID Act leaving most of the remaining states and territories operating under an extension through Oct. 10, 2016. DHS is continuing to provide extensions, as warranted, to non-compliant states, which are granted for a maximum of one year and may be renewed if a state demonstrates continued progress towards compliance.

Prior to the REAL ID Act, each state set its own rules and criteria regarding the issuance of a driver's license or identification card, including the look of the card, what data is on the card, what documents must be provided to obtain one, and what information is stored in each state's database of licensed drivers and identification card holders.

Title II of REAL ID – Improved Security for Driver's License and Personal Identification Cards –imposes specific federal driver’s license standards. Many of these requirements have been standard components of driver’s licenses for decades and fit international standards of photo identity documents. These requirements can be broken down by ‘visible’ qualities that are easy to spot at a glance (the physical format of the ID card and what information needs to be displayed on it); non-visible parameters such as the size, format and colors of the photo and the text on the card or the materials the card is made of; barcode features that provide an extra layer of security as they are devised to be more difficult to tamper with.

What are the most noticeable changes brought by the new REAL ID driver’s licenses? 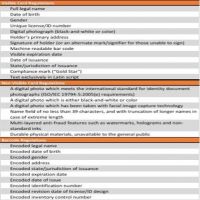 The good news is that the REAL ID Act has set forth new federally mandated requirements for all state driver’s licenses and ID cards. The Departme

Homeland Security (DHS) has set standards not entirely dissimilar from the requirements already in place for most states throughout the country.

Machine readable barcodes are now required to be placed on the back of compliant licenses. These barcodes are encoded with the ID bearer’s personal information, somehow duplicating the visible printed data, and including an inventory control number that provides information on the card’s current design and how it was produced.

The other most notorious change introduced by The REAL ID is its proprietary compliance mark - a “Gold Star” stamped on the front of compliant licenses. Those states and jurisdictions that continue to make non-compliant licenses and IDs available to residents alongside compliant versions need to implement two additional visible requirements:

How can the new REAL ID Driver’s License affect your identity verification process?

Although nothing has been specifically said about the potential implications of the REAL ID Act for financial institutions, it doesn’t hurt to be aware of how the new US driver’s licenses look like and how you can optimize your account opening within the digital channels to be a step ahead with your identity verification process. Especially since driver’s licenses are the most widely used ID documents in the US, being aware of the new regulation and knowing what to look for when you are verifying the identity of your customer is capital to ensure you are in compliance with the newest Know Your Customer rules. You will also be better prepared for the future – closer than you might think – when everyone wanting to open an account using their driver license must use a REAL ID compliant one.

For example, one might anticipate an avalanche of driver’s license requests as 2018 gets closer, since that’s the year when either a REAL ID compliant driver’s license or a passport will be the only ID accepted on its own to onboard a plane within the country. Similarly, drivers in the US have until October 2020 to replace their current license with a REAL ID compliant license.

As highlighted by the Department of Homeland Security, secure driver’s licenses and identification documents are a vital component of a holistic national security strategy as well as a very useful tool to combat identity fraud at different levels including account opening or ongoing authentication to access personal finances and bank accounts.