With 2017 about to give way to 2018, we have leveraged our unique insights and market knowledge to take a sneak peek into the new year, predicting five key changes that will redefine the future of financial services, shake up the sharing economy as we know it today and help organizations around the world enable the truly digital lifestyle consumers demand. 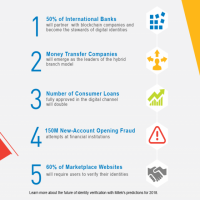 50 percent of international banks will partner with blockchain companies

Many view blockchain as a potential solution for secure identity verification in the digital channel, with its ability to serve as the backbone for a new system of federated digital identities.  IBM’s proprietary research shows that by 2020, 66% percent of banks expect to have blockchain in commercial production and at scale. We concur, knowing that financial trailblazers including HSBC, State Street, UBS, Santander, and Bank of America are already working on blockchain-powered solutions for bond transactions, cross-border payments, secure access, digital identity verification, and account opening and management. Confident that blockchain technologies make tracking and managing digital identities both secure and efficient, we predict that by the end of 2018, 50 percent of the leading banks around the world will leverage these advancements and become the stewards of digital identities.

The World Bank is projecting 3-4% annual growth in the coming years for international money remittances; growth that is rapidly fueled by the proliferation of inexpensive smartphones and rise of tech-savvier Millennials. Industry data reveals that circa 70% of money remitters are banked and digital-first. Meanwhile, ever-stringent Anti-Money Laundering (AML) regulations are forcing money transfer companies to embrace digital identity verification technologies to augment and facilitate in-branch services while better meeting compliance. Their commercial network is a formidable asset they will surely utilize, emerging as the leaders of the new, hybrid branch model that other businesses will emulate in the future.

To date, lenders have struggled to keep pace with consumers demanding convenient, end-to-end digital processes for loan applications and approvals. Furthermore, lending processes have not always kept pace with technology and consumer expectations. Consumers have been stuck “pushing papers” in various application stages lasting upwards of 10+ weeks.  We expect that to change rapidly in 2018, due to the prevalence of smartphones and the maturity level of digital identity verification technologies available today giving lenders and borrowers alike the needed trust in digital lending.

Last year there were more than 80 million fraud attempts at financial institutions using fake or stolen identity credentials (41 percent of new-account fraud uses real identities with correct personal information). Given the many large-scale data breaches that occurred this year, which compromised the personally identifiable information (PII) of billions of consumers, we expect this number to spike in 2018 to more than 150 million new account opening fraud attempts using stolen or synthetic identities.

60% of marketplace websites will require users to verify their identities

eCommerce websites and online marketplaces such as online auctions, dating websites, social media platforms, travel sites, care provider associations, and more are struggling to prevent fake profiles, bot accounts, and fraudsters from overrunning their platforms. On a related note, sharing economy organizations must invest to make sharing secure for their users and cost-efficient for their investors. In 2016 alone, the FBI’s Internet Crime Complaint Center (IC3) received close to 15,000 reports of “romance scams,” amounting to more than $230 million in losses. The issues of online dating scams have grown significantly, also affecting other adjacent niches such as caregiving or private tutoring. As a result, we expect 2018 will be the year they start making identity verification a priority, with 60% of online marketplaces and trust-driven businesses adopting technologies and techniques for verifying new users’ identities.

2017 will probably be dubbed the year massive data breaches went global. Yahoo, Equifax, IRS, Forever21… the list of organizations being hacked is enormous, as well as the amount of personal data leaked to the dark web as a result. Take the Equifax hack, for example, where virtually half of the U.S. population saw their personal information compromised. Soon after the data bureau suffered such an extensive data breach, Yahoo recognized that the magnitude of the similar attack they were hit by in 2013 was substantially larger than previously reported; it wasn’t 1 billion consumers affected- but 3 billion.

Meanwhile, regulators around the globe have increased the volume and frequency of customer due diligence processes, setting staggering fines for not compliance. Back in 2016, we predicted more than $5 billion in fines would be levied on financial institutions globally in 2017 due to AML violations. Well, between 2016 and January 2017, more than $15 billion in fines were announced.

Aware of the need of both consumers and organizations to turn the Knowledge-Based Authentication (KBA) page, Mitek forecast in late 2016 that more than 1 billion consumer records would be compromised in data breaches over 2017, reinforcing our commitment to help organizations mitigate the consequent rise of fraud with securer, faster, and seamless identity verification.

Back to 2016, at Mitek we foresaw the potential of digital for loan origination, predicting that Millennials will lead the pack on mobile mortgages. According to a recent research by J.D. Power, a total of 43% of mortgage customers indicate applying digitally in 2017, up from just 28% in 2016. Furthermore, conscious of the importance of meeting customers where they are( more so when we talk about wealthy, omnipresent Millennials) leading financial institutions such as Bank of America, are investing in developing a mobile mortgage offering, to compete with rising stars like Quicken Loans.